If you are just tuning in to the Jeremy London series, you might want to rewind to the first and second installment... or don't... whatever. Also? It was Jeremy's birthday, so this also doubles as a slightly belated birthday present to the big man.
MY FULL SUPPORT, BRUTHA -- HAPPY BIRTHDAY!
Now, roll out the fiction...

Lady Estrogen (that's me, yay!) has been working diligently trying to get Jeremy into some big projects over the past few months. She's not overly good at her job, but dammit, she tries. Jeremy humors his struggling agent, but mostly because he can't be bothered finding a new one. Lady E is relaxing at a booth with red leather seats. She has a portfolio case sitting on the table and she sips her coffee as she eagerly waits for Jeremy. He enters the café and spots her, giving an unimpressed nod that he has seen her and approaches.

Jeremy London: Hey. I got your text. What was so urgent? I have a busy day today.

Lady Estrogen: Sure you do.

LE: You know it comes from love, Jeremy.

JL: What do you want?

LE: I love how you make time for me.

JL: The clock is ticking.

LE: Okay. Okay. Look, I want to spice up your filmography a teeny bit. I think it might do well to beef up your resume. I mean... we all do it - why not actors?

LE: I got some random movie posters and I've added you to them!

JL: You can't do that! That's just fucking lying. You're ridiculous.

LE: They'll get lost in between your authentic jobs. Like I said, it's just filler. See? Here's the first one I did... 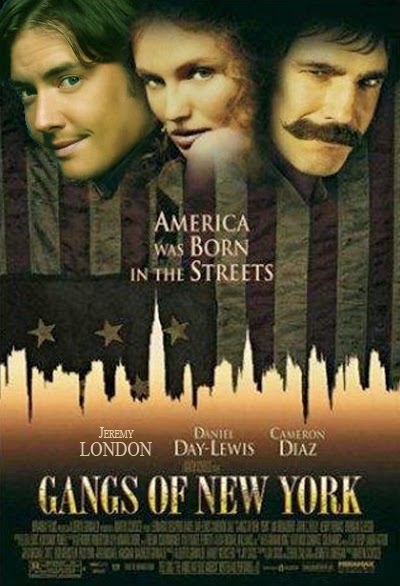 LE: Huh. Never heard of it.

LE: I think you just mocked me, but I'm going to rise above, Jeremy. RISE ABOVE.
OK. How about this one? Titanic? You like tits, right? 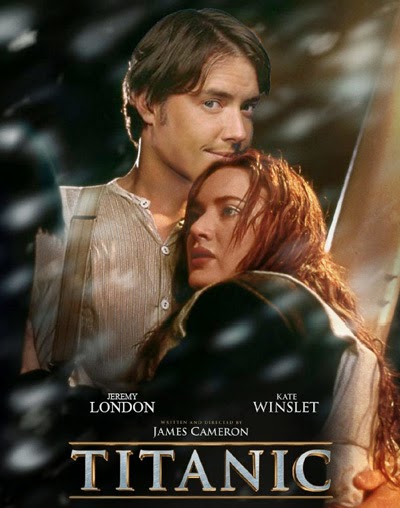 JL: TIE-TAN-ICK. It's another big fucking movie. And? It won, like, 10 Academy Awards.

LE: Wow. I really need to take a trip to Blockbuster.

LE: WHAT THE HELL? Are you serious or just fucking with me?

LE: Well, you're missing out, but anyway, how about this one? You can't tell me THIS one was a big hit. It's from a while back, so I used one of your younger photos. 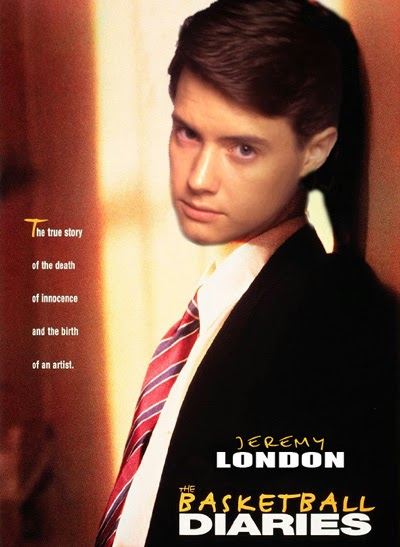 JL: What the hell is wrong with you? What movies HAVE you seen?

LE: Well, Mallrats... at least most of it, anyway. They lost me with the whole "a schooner is a sailboat" realization. What a mind fuck THAT was.

LE: I don't know - I matched it up to the dude's head underneath. I guess his head was big too.

JL (rubbing his forehead as if he's getting a migraine): Really?
Actually... all of these posters have you replacing him with me. Did you notice?

LE: Total coincidence. Is he the orphan from Growing Pains?

JL: That detail you know, but Titanic you don't?

LE: I heard Kirk Cameron is selling bibles or some weird shit like that. Now that's def-in-ite-ly not the Kirk Cameron I masturbated to as a young girl.

JL: Wow. Have you been huffing glue?

LE: I don't think so. Why? Do you know many glue huffers?

JL: THAT was an insult. And your time is soooo up.
(Jeremy is getting up out of the booth and adjusting the collar of his jacket)
I don't think I'll be needing your "ideas"... EVER.

JL (with a look like someone just shit in his mouth): It's a big motherfucking NO.
By the way, don't text me again. If I need something, I'll be in touch.

LE: I'll reduce my services to only 7 PERCENT. How'd that be? I'll get you a limo! A nice stretch job with a TV and a bar! How's that sound?!

JL (He doesn't look back as he walks away from the booth): Don't care! Don't call!

LE (whispers dramatically to herself): I will win you back, Jeremy.
(yells across the café): I WILL WIN YOU BACK IF IT'S THE LAST THING I DO!