Welcome to the Dick Sisterhood

So, it has finally happened, and not from any actions on my part, which is probably the most shocking detail.

I now have a dick sister.

What's a dick sister, you ask? Well, just in case you didn't know, the Urban Dictionary defines it as such:
"A combination of women who have had sex with the same man."

Well, that about sums it all up.

It's a strange feeling for me and I wasn't sure how to take the news at first. I was a firm believer in the whole 'don't crap where you eat' life motto and I rarely dated slept with guys from my own social circles.

I also enjoyed the encouraging phrase of 'there's plenty of fish in the sea' so I wasn't really a fan of sharing the same sea cucumbers with my friends - so to speak.

It even bothered me when I would be in situations where friends of mine would cycle through boyfriends between each other. They seemed OK with it, but I would put on a fake smile and be screaming on the inside, "HOW CAN YOU MAKE OUT WITH HIM KNOWING THAT HIS TONGUE HAS BEEN UP YOUR BEST FRIEND'S TWAT?!" Gahhh! It irked me to great lengths.

Even in University, when my personal skank factor was upped a notch or three, I still managed to escape forming any dick sisterhood relationships (I shall let some brief oral encounters slide on this one, mmmk? AHEM)... until now.

A whole decade later! One of my best friends did the down and dirty with one of my long-since-passed "he is the one" ones...

So it wasn't completely gut-wrenchingly awful news, however, even after all these years, it still did feel like someone had just kicked me in the ovaries when she told me. All the hairs on the back of my neck stabbed me repeatedly, attempting to paralyze my legs by severing my spinal column. Mentally, I was better than I expected, I mean, after all, it was a long time ago. But my physical response to the news just solidified what I have known all along, and that was that I was strictly a fresh cock kinda gal.

I feel like there's some sort of induction ceremony or initiation that needs to be performed. I didn't know what to do since this is all new to me.

I sent her an edible arrangement and paid $5 more for some extra bananas... 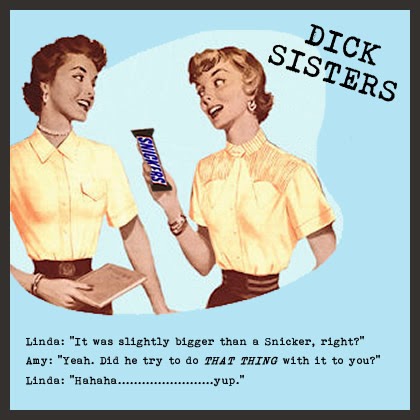