As I am sitting here getting a rare opportunity to watch Aussie Rules Footy, it has occurred to me that in 3 years I have not yet mentioned my, ummm, let's go with "enthusiasm" for the game.

I had always been interested in sports, and I had a favorite team in most professional leagues (sometimes I switched teams... ba dum bum bum) but it was never more than a strong liking. It wasn't until I was taken to my first footy match that I truly understood what LOVE for a sport meant. The entire crowd was completely submerged in the game - and never came up for air.

Every kick.
Every mark.
Every goal.

Every second of every quarter, the roar of 98,000 people rumbled in the pit of my stomach.

The first game I ever saw (on TV or in person) was Collingwood V Geelong in 1994 and since I was there with Jim, who was a Collingwood supporter, and because I didn't know what the hell was going on, I assimilated his allegiance. And then they won... and the crowd went totally fucking berserk. Well, hell yeah! That's my kind of people - for the most part.

I quickly learned that Collingwood supporters are THEE most obnoxious fans in the entire league and if you don't follow them, then you HATE them; they are the most hated team in the league. They would be likened to that of the Oakland Raiders -- when anyone actually cared about American Football, that is.

If you love the Magpies, you REALLY love them, like this guy... 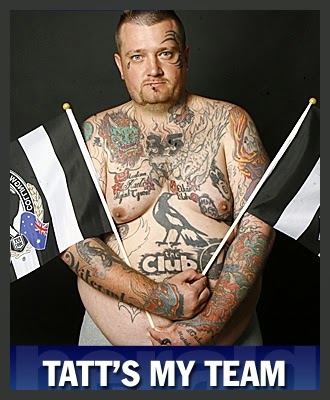 OKAY. So, I might not be THAT insane, but I absolutely love wearing my Magpies' scarf/hat/jacket in Toronto - especially on public transit. It draws out Australians like a magnet of hatred. I cannot even count the number of times a complete stranger has come up to me, just to tell me that Collingwood sucks!

I learned the sport quickly, and I tried out for the high school team and made it. It was great times! But I must admit, I rather preferred sitting on the side lines to watch my boyfriend (Oops. Every time that is said, a feminist shaves her pits!) while he ran his cute, tight ass up and down the oval.

The typical guy that plays Aussie Rules has all these wonderful features:
1. Big arms
2. Big thighs
3. Tight, small ass
Oooh yes, and...
4. If they moaned my name, it would have an aussie droll.

It's the only thing that's ever successfully hypnotized me. True story.

And being an exchange student did have its perks - because after writing a cheesy letter to their club, they invited me to come after a game and MEET ALL THE PLAYERS.

Then later that night (possibly not thinking entirely about him), I rode my boyfriend like a wild stallion.

Holy hell, I sure do love Australian football.