Since I've been home with the boys for the better part of a year now, I think I'm starting to crack at the seams a little, particularly with my intense criticisms of children's programming. Unfortunately, I'm still having to do freelance work here and there, so babysitter à la television has been a huge help, but I have reached my tolerance limit with certain shows. I just can't take them anymore.

10. Bubble Guppies - I cannot fault the music element in this show; it's quite impressive. But what the shit is going on with their environment?! Are they under water all the time? They're fish, right? So they must be! Then they travel on airplanes and attend rodeos and partake in desert adventures . . . under water? The cows have fins but the elephants do not? I'm confused and I don't like being confused by inconsistencies in a cartoon! Fuck it.

9. Toopy & Binoo - Not sure if this one is exclusive to Canada or not, since it's a French-based show. If you've never heard of it, consider yourself lucky. My kids LOVE it, much to my horror. I don't mind Binoo because he/she/it doesn't talk, but Toopy? Let's just say that if you believe in an existence of Hell, it's likely where you would get strapped to a chair & be forced to listen to Toopy narrate The Bible for all eternity.

8. My Big Big Friend - This would actually be a half decent show if it wasn't for one character - LILY. She's a little cunt! It actually upsets me that even though the two boys have rare moments of imperfection, she is a HORRIBLE girl that's usually quite mean to the boys. Is this necessary? I don't think so. It's very gender biased and it makes me twitchy.

7. Max & Ruby - Ditto with what I just wrote from My Big Big Friend. Ruby is a bossy bitch who's constantly talking down to her brother even though he's clearly not an idiot. And where the fuck are their parents?! Did the writers just decide they'd be too much of a hassle to create? Maybe if Ruby had a parent around, she wouldn't be such a skunt.

6. Little Einsteins - (aka. Little Pretentious Bastards) When a good accomplishment according to my sons is removing a giant booger from their nose, I find it almost embarrassing for this show's creators that they believe toddlers give one ounce of fuck about Beethoven and what he looked like in 1800. They try way too hard. They put up a flash card portrait of Warhol the other day, like, near the end of his days when he was frazzled and freaky looking. What the hell? I have a degree in Fine Art and even I don't need to see that shit on a Saturday morning.

5. Yo Gabba Gabba! - I have issues with any "human" hosts (or children's TV actors) that talk too animated where their mouths open too wide & their entire pupils are showing like a deer in headlights. It's not necessary and it creeps me out. And the puppet characters? I'm sorry, you'll never be Fraggle Rock. No amount of celebrity guest stars will ever get me to tune in to this clusterfuck. Banned.

4. Dora the Explorer - FOR THE LOVE OF ALL THAT IS HOLY, WHY IS SHE ALWAYS YELLING? Banned.

3. Peppa Pig - Oh, that voice. I even mute the commercials for this show. I think they searched all of the United Kingdom to find the single most annoying girl to voice Peppa. I haven't even watched it long enough to determine if she's a nice little piglet or not. She would likely cover Toopy's lunch breaks and read The Bible to you IN HELL. My husband was the quickest to ban this one.

2. Mike the Knight - The biggest little asshole in all the land. Seriously, he's a fucking selfish jerk and treats his friends like complete shit. My son said to me the other day, "I don't like Mike the Knight because he's not very nice." And it was one of the best parenting moments ever! Banned.

1. Caillou - The whiniest weirdo, bar none. A show that teaches kids how to whine, have tantrums and have a spoiled attitude. No fucking thank you. AND WHY IS HE BALD? No one else is bald, not even his baby sister. And I'm pretty certain he's not on Chemotherapy.  Banned for eternity.

Dishonorable mention: Thomas the Tank Engine - You are NOT a very useful engine. In fact, you are a defiant, ignorant, trouble-making pile of metal that causes the train company likely hundreds of thousands of dollars in damages every year. You suck and I resent the fact that half of my house is covered in your over-priced merchandise.


On a positive note, I should add that I believe good programming for kids DOES exist -- just few & far between. I'd give my tramp stamp of approval to the following:
1. Octonauts - I learn new shit about the ocean every damn day.
2. Imagination Movers - Scott is my boyfriend and Dave is my homeboy.
3. Cat in the Hat - Dr. Seuss and Martin Short, enough said.
4. Handy Manny - You can't deny that the sexual tension between Manny and Kelly is intense, yo!
5. Mickey Mouse Clubhouse - Although mildly annoying, it's the type of annoying most of us have been desensitized towards, having been raised on that weird little mouse ourselves.
6. Agent Oso - OK, there was a time I detested Oso on the sole ground that he's the dumbest fuck of all time. I've since learned to tolerate him now that the boys are smarter than him & find his stupidity funny. And there's bigger fish to fry, so to speak.
7. Sesame Street - Because it will always be awesome.


What shows do you enjoy, tolerate or absolutely refuse to have on?
. . . even in the distant background, while you try your hardest to ignore it.

So everyone's going to BlogHer13

It's that time of year again -- BlogHer season. I had my Early Bird ticket and I was all set to go, and then this happened, so with a heavy heart, I sold my ticket. This is not to say that I'd trade one for the other, because WHAT KIND OF MOTHER WOULD I BE? but nevertheless, I was looking forward to seeing the friends I made from last year's BlogHer12 in NYC as well as meeting new bloggy & Twitter friends.

Anyway, I'll keep this sulk short since most of you will be in Chicago, likely drinking, and not reading this anyway! I've channeled my inner teen angst for this one . . .

YOU KNOW WHO YOU ARE.

I was shopping at an outdoors'y store the other day (looking for a fanny pack, as ya do) and nestled right between the travel eye masks and the reading lights, I found unexpected gold. 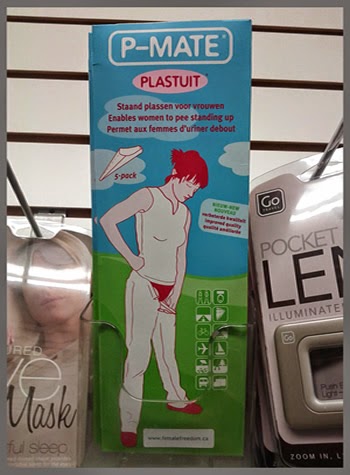 I remember a while ago finding a similar contraption to this, but they are bigger and kind of remind me of the stainless steel ice scoopers that I used during my bartending days -- not exactly something you'd want to carry around in your over-sized purse unless it really is the ice scooper that you're stealing from the bar. Amirite?
Anyhow, my initial reaction to these products are always giggley and immature. I mean, the function of them is quite silly, BUT then my ever-existing phobia of public toilets kicks in, and I think it's an amazing concept. The further away my ass can be from where some other stranger's dirty ass has been, the fucking better!

I know I'm a bit of a different beat when it comes to my toilet logic, because it's not "germs" per se that make me squirmy (I actually don't give a crap about germs), it's the human filth; even my own filth. Anyone in public health has my utter respect, because I just can't go there. Ever. This is another reason why the "GoGirl" and other reusable devices like the Diva Cup are things I have a hard time with, even though I know they're better for the environment as well as my body . . . blardy bargh blar. And let's face it, not everywhere has a working sink or clean water, so the thought of not being able to properly clean off said reusable device terrifies me beyond anything that could gross me out from the old fashioned alternative.

That's yet another reason why this "new" disposable (yet biodegradable, so that's at least something) product tweaked my interest. Perhaps some day soon, when I can actually SEE my vagina again, I might entertain the idea of trying out one of these little P-Mates -- on a plane comes to mind for sure, because BARF-GAG-WRETCH.

So what?! We still cannot know what it's like to jerk ourselves off just yet, but this is a good start in the right direction to conquering penis envy, for sure.