I was never a girlie-girl. When other girls were playing Hop-Scotch or Barbies, I was at the local pond catching frogs. My mother would occasionally sew me a dress and I would reluctantly wear it a couple times, although it was usually made for a particular event to which it was a necessity to wear it.

I was very good at ruining pretty things. I can even recall at my mother's wedding, I had ripped the lace hem clear off my flower girl's dress and my Aunt was frantically sewing it back on in the limo while I was completely hysterical. Shit! Dresses are so much maintenance! Too much.

So, when it came time to try on wedding dresses, I was not overly enthusiastic. My mother, nor any of my bride's maids were in the same country as I was at this point, so I went by myself to try on a couple... testing out the shark infested waters, so to speak. I went to this small shop in my local town and it was definitely a sensory overload when I walked in. The shop owner was a plump little Italian lady with an amusing Italian/Scottish accent. She must have immigrated to the UK at least 20 years ago.

All three looked fucking hideous to me and she could tell I didn't look impressed. She flared her nostrils at me and said, "Oi! Just try them!"

And then she followed me into the changing stall.

Ack! What the hell was going on? I quickly figured out that these dresses weren't to be handled by anyone else but her. After my initial shock, I was OK with her being there. I have a poky Italian grandmother that's been coming in the change rooms with me since I was a kid, cupping my boobs and pinching my ass when she didn't like the fit of something on me; I was used to being molested by Italian women.

After she poured me into the first dress, which had a corset with highlighted boning and a flared skirt, I turned around to look in the mirror. My pupils dilated and my heart began to race.

The same thing happened with the other two dresses... and another two that I had found. I didn't hate any of them; it was just varying degrees of love. What was wrong with me? I was high on wedding dresses and I loved the feeling; I didn't want it to end.

I knew I would have to pace myself. I held off on getting another wedding dress fix for about three weeks. I was jonzing by that time and as I approached the next dress shop on my hit list, I felt my anticipation rising.

After my fourth euphoric dress-trying-on session, I knew I had to either piss or get off the pot. I had learned what I wanted by then and admitted to myself that I was getting a little too addicted to the whole process of it all. Those dresses were like cocaine... beautifully white and fluffy no matter the cut; I wanted to snort them all! I realised I had to quit cold turkey and just buy one already!

I suffered from withdrawals until the day came when MY dress arrived. It was mine for all eternity! [insert evil laugh here] The wedding day went by WAY too quick! Some days I want to just put it on to lounge around the house or do laundry in it. It was beautiful, elegant and GIRLIE, but at the same time, it was different and unconventional, just like me.

I was in love with my dress, along with matching bolero jacket (it was -13 degrees out) and my special ordered velvet navy blue Doc Marten's. Yes, you heard me right! There is a strong possibility that if they did a last minute Groom switch, I might not have even noticed!

So, you probably want to know which one I decided on, right? OK. Here you go. 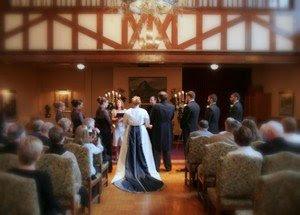