It was a full moon this weekend; no big deal. It was also a BLUE moon, which is kind of a big deal, so I'm sure somewhere some Smurf enthusiasts are all soaking their little tighty whities. The fucking Smurfs. Have you seeeeen that movie? Anyways, I have always found it fascinating that the lunar cycle has the ability to affect us one way or another... especially us ladies, uterinally speaking, of course... because this happened...

I don't know if it was a combination of all things lunar, or because I've been playing way too much Words With Friends with Brandon, or even whether it was just a simple case of eating an unnatural amount of pistachios on Saturday night, but whatever the reason, I had a seriously fucked up dream that I need to share with you:

I was 19. I was at a gas station that looked like somewhere right out of 1980's middle America. It was dusty and dry. There was a young teen girl in a bland cotton dress being mildly harassed by the gas station attendant, and even though I couldn't quite make out their argument, I briskly walked over to defend the girl since she appeared to be on the verge of crying. The misunderstanding wasn't explained but I went into the service booth with the scruffy attendant that was wearing a jumpsuit that hadn't looked like it had been washed in a month.

We didn't even talk about the girl. He whipped out a huge water bong and asked me if I wanted a hit. I was impressed at the contraption and said, "Sure." So we were there, the two of us, hot boxing the booth while the girl stood on the curb stared at me with her admiring doe eyes, which were slightly glazed over and puffy from stress and fighting back tears.

Then, the guy told me to take the bong, which transformed into an electric scooter! He quickly showed me how I could ride it and then dismount to take a hit, and then continue riding again.

I left with my new scooter bong and the girl was relieved to see me, as if I had saved her from something I still wasn't quite sure of. She invited me to come stay with her family, and being curious and a little stoned, I agreed. When we arrived at her house, it was made very obvious to me that it was a polygamist Mormon family compound... and there were many, many, many children. Most of them all carried a strong family resemblance, particularly in their noses and chins.

There were about 16 that immediately and overly-enthusiastically came up to greet me, kind of like the end scene in Temple of Doom when all the kids are running towards their parents. Without even thinking, I transformed my scooter and taught all these kids how to smoke weed from the water bong.

Every sibling over the age of 14 was now high. I didn't give any to the younger ones, because apparently, even in my dreams, my anti-morals have limitations. Then the father rang some kind of obnoxious bell to round up everyone for a teaching session. Giggling, we all stumbled in, myself included. We entered a fairly large classroom full of desks and chairs. The room quickly filled with both boys and girls of all ages; the girls were dressed like Mennonites and the boys like a stereotypical Missionaries with black pants and white shirts. At every work-space sat a very sleek computer. After some brief introductions and minimal instructions from their father, he left the room. I then spoke out and asked about the "bullshit parental controls" on these computers. They said it was protect their innocence.

I said, "Well, just Google key image words like 'pretty holly' and 'sweet candy' to get around those filters and they could check out some fairly good boob shots; maybe even some bush!"

What the fuck is wrong with me?

And all this is why I cannot be trusted, even in a subconscious world far, far away. 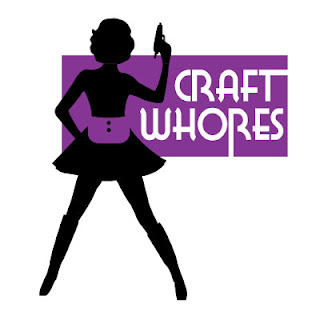 And since I mentioned The Suniverse today, her and The Bearded Iris are having an awesome contest called Craft Whores.

Damn right, you should be! Click on one of their links for the details. I'm too much of a lazy bitch to steal re-write all their hard work. Basically, make crafty shit that is good n' whorish & then link up to win. YAY!!
Posted by Lady Estrogen
Email ThisBlogThis!Share to TwitterShare to FacebookShare to Pinterest
Labels: Contests, Dreams, Mormons, Religion, Weird Me